VMR-HD4D Series Outlet Metered Switched PDUs are available in dual 32, 30, 20 and 16 Amp configurations, as described in the table below: 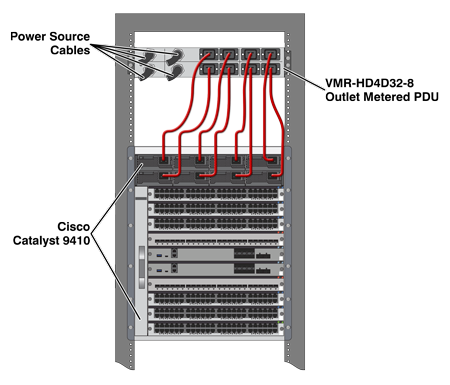 Advanced metering capabilities allow the VMR-HD4D to measure and report Kilowatt Hours, Kilowatts, Amps, Voltage and Temperature. When any of these factors exceed threshold values, the VMR-HD4D can switch or reboot power and promptly send notification. Alarm notification can be sent via SNMP Trap, Syslog, email, or text message, and for onsite notification, the VMR-HD can also sound an audible alarm or illuminate a status LED. The VMR-HD4D can also perform remote reboots and power shutdowns on demand, or when a device fails to respond to a ping command or according to a user-defined schedule. 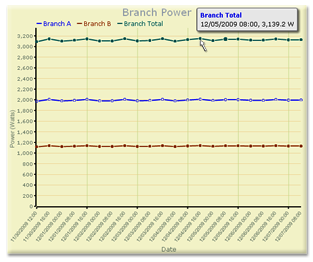 Monitors Current Conditions, Helps You Plan for the Future

It's difficult to anticipate HVAC requirements for high density power applications unless you know how much power is being consumed in your equipment rack. The VMR-HD4D's power metering capabilities provide system administrators with vital environmental data to aid in timely decision making and help plan for future requirements. But since even the best laid plans can have unanticipated weak points, the VMR-HD4D also includes a temperature monitoring function to allow you to easily see if your rack is overheated or under ventilated.

When an over current condition is detected, the VMR-HD4D's convenient load shedding feature can temporarily shut off power to non-essential devices so that sufficient power is available to critical devices without overloading. This allows you to prioritize the use of available power, reserving power for critical applications, while providing the capability to shut down less vital devices.

Outlet Sequencing and Power Up Delays

If you need to determine the order in which outlets are powered up after a reboot, there's no need to juggle power cords from outlet to outlet with the VMR-HD4D. The VMR-HD4D allows you to select the power-up sequence for all outlets, and also allows you to define a pause period between each outlet. This is a very handy capability for applications where one device, such as a server or switch, must be powered up and allowed to boot up before the next device is powered on.

Since IT equipment is often the heart and soul of your business, switched PDUs are only as good as the security and authentication features that they provide. It's pointless to provide remote power and reboot control unless that control can be protected from unauthorized access. The VMR-HD4D includes SSHv2 Encryption, LDAP, Kerberos, RADIUS and TACACS+ capabilities, plus SSL Web Browser (Https) compatibility to ensure that access to critical power control functions remains secure.

If you need reliable, secure, remote power control for high amp devices such as Cisco Catalyst 9400, Cisco Nexus 9000 or HPE 7000 BladeSystem servers, take a closer look at the wide range of features and capabilities that our new VMR-HD4D Series Switched PDUs can provide. Check out our Switched PDU pages for further details, or contact our sales team today!