Why do i need a dual ethernet console server?

Why Do I Need a Dual Ethernet Console Server?

If you’ve shopped for network equipment lately, you’ve most likely noticed that many new network devices are now available with dual Ethernet ports. While the presence of an additional Ethernet port can obviously serve to improve the reliability of communication with critical network elements, many network users often are unaware of other advantages that can potentially be provided by a dual Ethernet device. 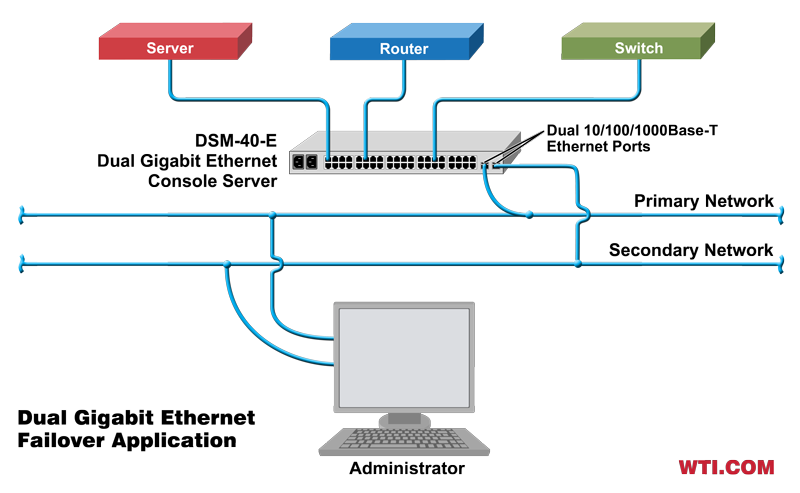 In IT industry applications, the most commonly encountered implementation for dual Ethernet devices is to provide automatic failover/fallback capabilities for critical network elements. In this case, a dual Ethernet device such as a WTI DSM-40-E Console Server is connected to both a primary network connection and a secondary network connection; the same IP addresses and other network protocol are then assigned to each of the two available Ethernet ports. If either network connection fails or becomes temporarily unavailable, this allows the dual Ethernet console server to automatically fallback to the other Ethernet port, ensuring that the device is always accessible when needed; even when the primary network is not available. 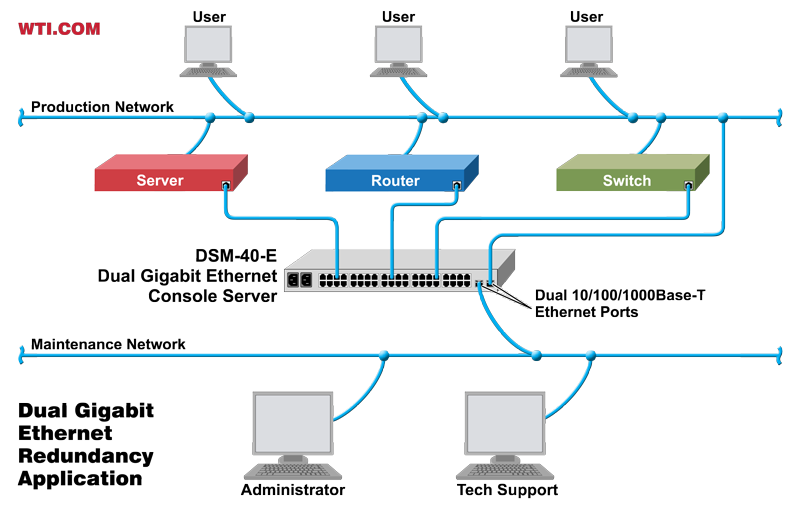 In a network redundancy application, a dual Ethernet device is connected to two separate networks in order to reduce traffic or load on one of these networks. This capability can be extremely handy in any case where two networks are present and there is a need to reserve one of those networks for maintenance and service functions. Typically, a network redundancy application will include both a production network that is generally employed by only end users and a maintenance network that is primarily used for configuration purposes, firmware upgrades and other network maintenance related tasks.

This type of network configuration provides end users with prompt access to various devices and services on the production network while simultaneously providing technicians and service personnel with a maintenance network which allows them to upload firmware, diagnose problems with network elements and tweak configuration parameters without overburdening or slowing the production network. 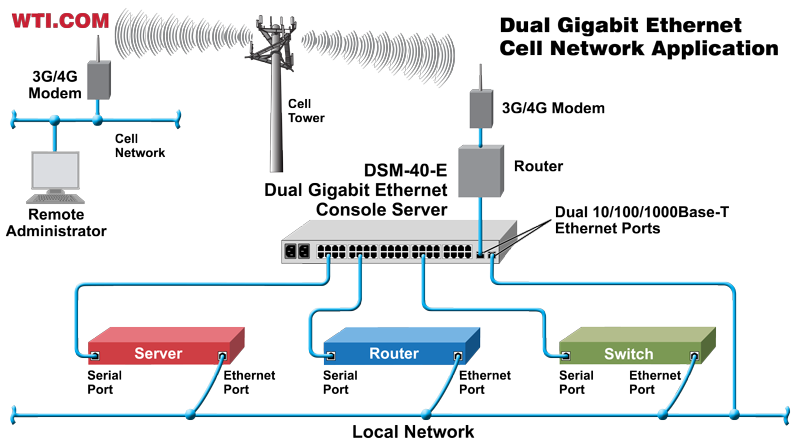 In this type of application, the primary Ethernet port supports direct network access to the dual Ethernet console server, while the secondary Ethernet port can be used for secondary or maintenance network connections while simultaneously maintaining a private LTE network connection. This provides private cellular network users with secure, reliable out-of-band communication with the dual Ethernet console server (as well as other devices on the network,) preserves the ability to communicate via normal Ethernet connection and avoids the need to forfeit a much-needed serial console port for cell modem installation.

In addition to providing cellulr network access to the dual Ethernet console server, some users have alternatively employed the second Ethernet port to host an Iridium satellite modem. In situations where equipment location does not provide easy access to a land line or cell tower signal, an Iridium satellite modem often provides the only practical means to establish an out-of-band access to console server functions. 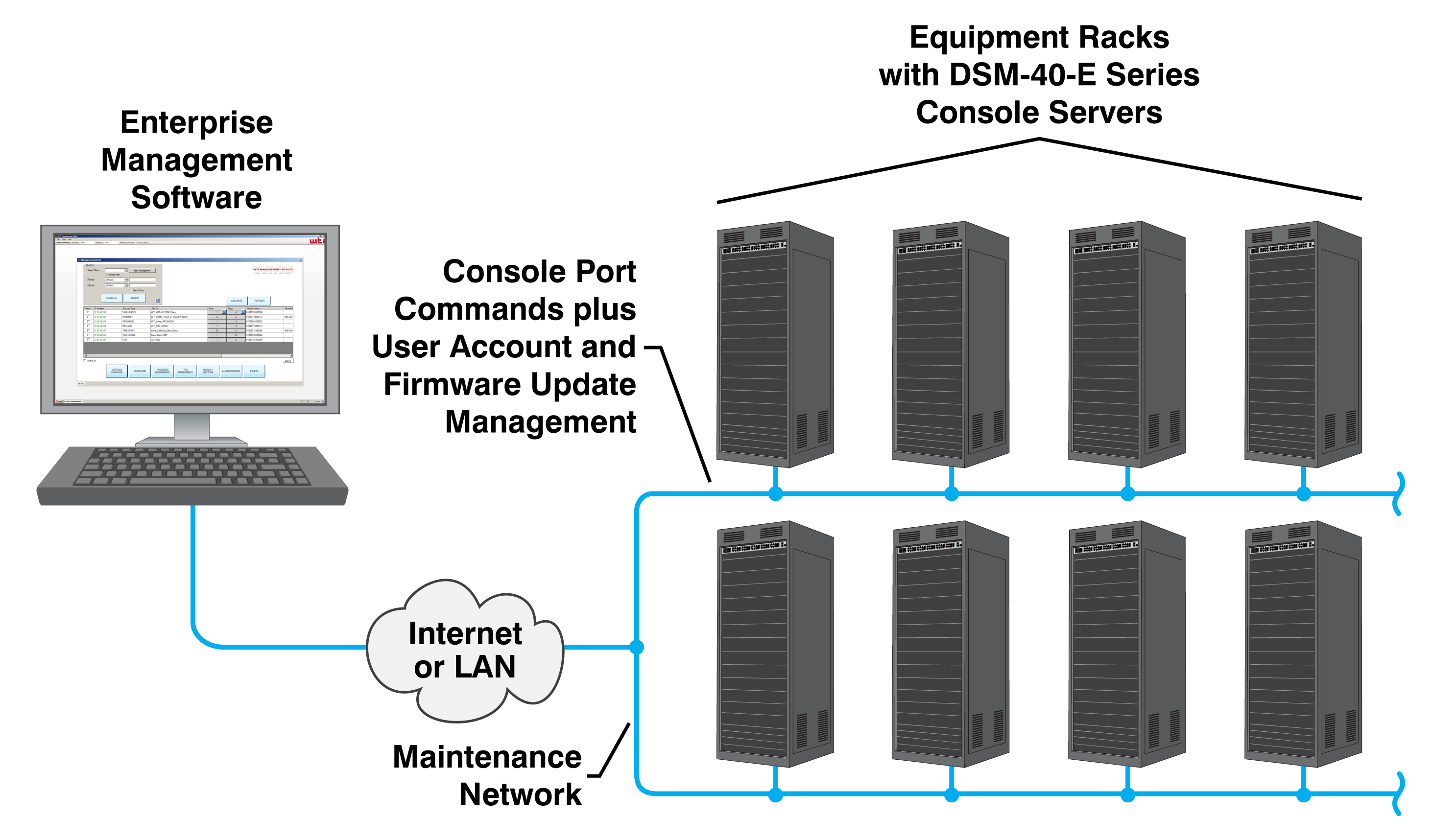 In out-of-band management applications that require communication with a large number of console server units spread across an extensive network, the task of finding the desired console server unit can often pose a challenge. WTI WMU Centralized Management Software can simplify this process by providing administrators with a single, centralized interface that can be used to quickly find and address specific console servers within the network.

The Centralized Management Software allows administrators to identify each individual DSM-40-E unit on the network, organize units into groups based on location or functionality and quickly invoke console port command functions on network elements that are connected to the console server. In addition to providing quick access to console port command functions, the Centralized Management Software also enables administrators to perform firmware updates and manage passwords for multiple or individual WTI units.

Although the examples discussed here probably represent the most commonly encountered applications for dual Ethernet capabilities in an IT environment, there are also dozens of other possible applications for dual Ethernet units that differ from one industry segment to the next. In the near future creative IT professionals will inevitably find many other innovative ways to employ dual Ethernet network devices in a corporate network environment in order to cut costs, simplify communication and add functionality and flexibility for their network users.