Switched PDUs, such as WTI’s VMR-16HD20 series Outlet Metered PDUs can perform many useful functions in product development test labs. In addition to providing a centralized power control point that can be used to initiate reboot cycles during regression testing, advanced switched PDU products, like the VMR-16HD20 can also be controlled by Linux Shell script in order to automate power on-off switching for repetitive reboot tests. 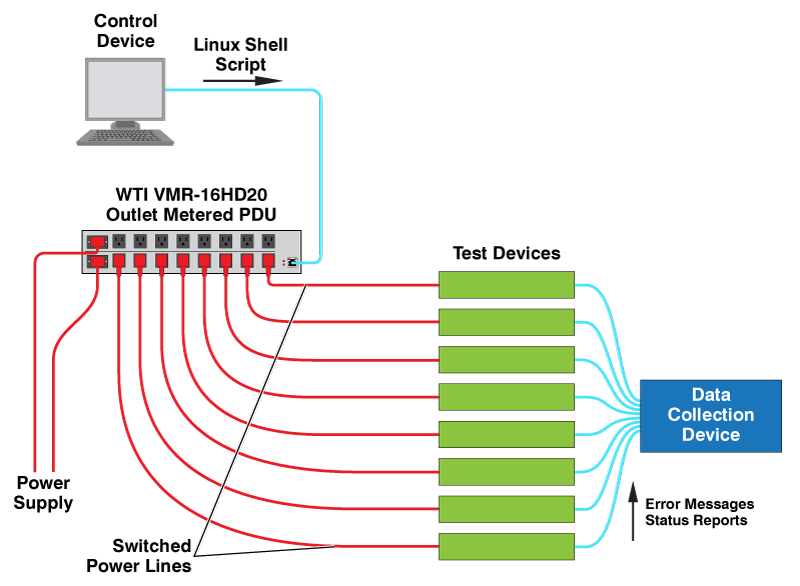 During product development, repetitive reboot testing provides engineers and developers with a means to observe how a test device reacts to power reboots. Typically, this is accomplished by first connecting the test device to a switched PDU, and then connecting a data collection device to a set-up port or console port on the test device. Each time power is switched Off and On, any error messages or status reports that are generated by the test device can be easily captured and used to analyze device performance and detect potential problem spots.

In order to automate the repetitive power reboot test, simple Linux Shell scripts can be employed to initiate power Off and On switching. This both eliminates the need for constant human oversight of the test process and also adds a new level of consistency for test results by ensuring that each reboot is relentlessly performed according to schedule, without interruptions or lapses.

The VMR-16HD20 provides the perfect switched PDU solution for this type of testing. In addition to supporting operation via Linux Shell script, the VMR also includes advanced security and authentication features to ensure that any SSH and Web communication with the Switched PDU is secure and adequately protected from unauthorized access.

The VMR’s outlet power metering function can detect test devices that have ceased to draw power from the unit and can also detect test devices that are drawing abnormally high levels of power. Power consumption data can be retrieved from the VMR in XML or ASCII plain text format. The VMR includes a comprehensive array of event and environmental monitoring capabilities that can track test device response to ping commands and other noteworthy conditions and generate alarms when monitored conditions exceed user-defined parameters.