Reliable communications are a vital factor in large scale mining operations. In addition to helping to maximize productivity by limiting downtime and cutting the time required to solve unexpected problems below ground, an effective communications solution can also simplify the task of locating miners within the mine and provide for rapid notification of rescue personnel in the event of an emergency. 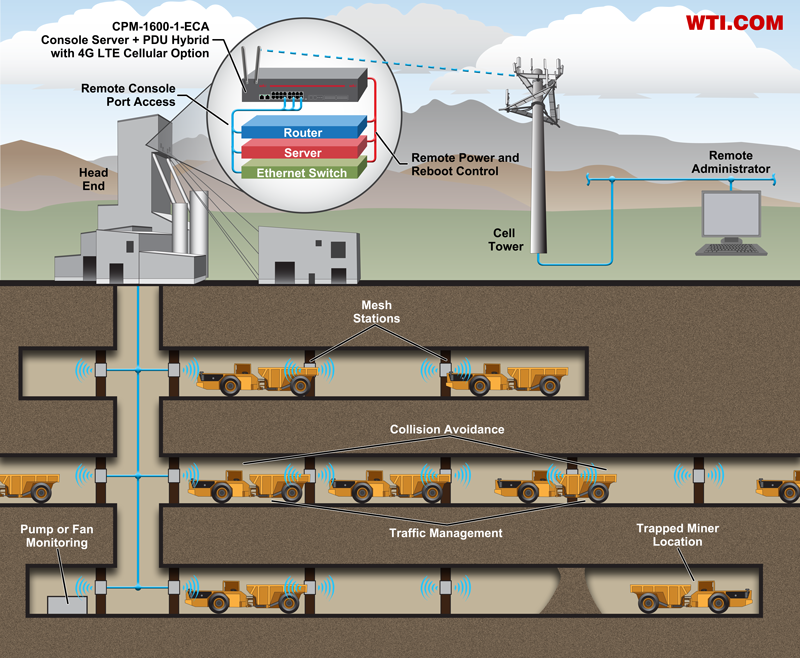 In most cases, mines employ wireless mesh technology to simplify VOIP communication below ground. Mesh technology provides an ideal fit for the communication needs of the mining industry, whereas more familiar communication technologies such as cellular broadband and wire phone lines are largely impractical when implemented inside the mine. Cellular signals generally can’t penetrate the mine’s dense rock walls and wire phone lines are expensive to install and maintain and also vulnerable to damage by mining equipment and fallen rocks. To add to the bargain, mesh technology also provides mobility and flexibility in an environment where work sites are constantly on the move, often relocating daily in order to follow a rich seam of ore or coal.

The layout of a mesh communication system is fairly simple; wireless mesh nodes are generally installed on support columns located throughout the mine and then linked to an above-ground, head end communication facility, which typically includes routers, servers and switches, similar to what would be seen in any large, corporate network equipment room. In addition to allowing personnel within the mine to contact above-ground personnel, the head end communication facility will also offer some means (typically satellite network) to communicate with other mines belonging to the same company, plus allow communication with the corporate office.

Although this system generally works very well, there is one weak point. If a server or router located in the head end communication facility crashes, or if satellite communication suddenly fails, then all communication with the mine is dead until tech support can remedy the problem. Given the extremely remote location of most mining operations, it can take days for a tech team to travel from the home office to the mining site in order to restore communication. This sort of delay can result in hundreds of lost man-hours of productivity since many governments have regulations that require constant communication with below ground personnel, and when the mesh network is down, all productivity at the mine must be stopped.

Fortunately, there’s a relatively simple solution to this problem; in addition to primary communication via satellite, the head end facility should also include a secondary, cellular broadband based out-of-band communication strategy. When a cellular broadband based out-of-band management solution is deployed, network engineers at your NOC can establish a connection with the head end facility via 4G LTE cellular when satellite communication is down. For larger head end network applications, a WTI CPM-1600-1-ECA Console Server + PDU Combo equipped with the 4G LTE Cellular Option can be used to provide out-of-band access to console port command functions and remote power and reboot switching functions. For smaller head end network applications with less rack space, a WTI CPM-800-1-ECA Console Server + PDU Combo with the 4G LTE Cellular Option can be deployed to provide out-of-band console access and power and reboot control for up to eight networked devices at the remote site.